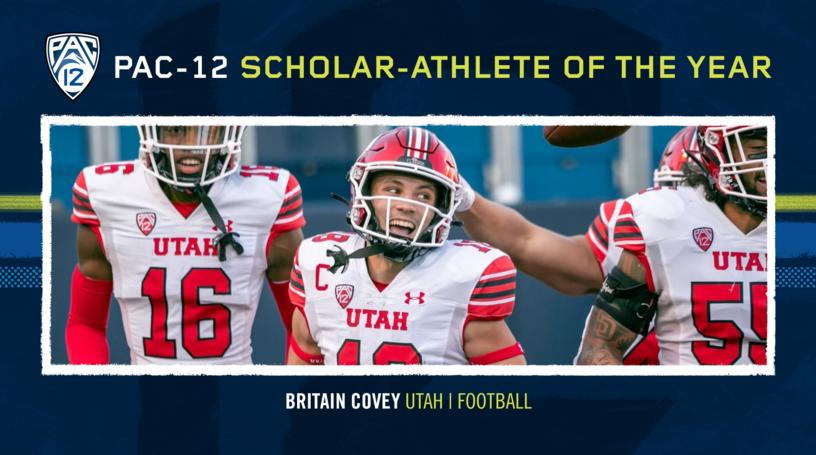 PAC-12 STUDENT ATHLETES OF THE YEAR

SAN FRANCISCO – UTAH Great Britain Covey was named 2021 Pac-12 College Football Athlete of the Year, the conference announced today. The award, which is featured in each of the 24 Pac-12 sponsored sports, was created to honor college student-athletes who stand out both academically and in their respective sport disciplines.

Covey is the first Ute to win the Pac-12 Football Scholar-Athlete of the Year award since joining the Conference. The fifth-year catcher from Provo, Utah, graduated in commerce in the summer of 2021 with a GPA of 3.86. In November, Covey was named to CoSIDA’s District 8 First Academic Team to be eligible for Academic Honors from across America. This was his third Academic All-District selection and he was named Academic All-America after the 2020 season.

On the court, Covey is the team leader in receptions (44) and has returned two punters for touchdowns so far this season. He’s a four-time All-Pac-12 selection, three as a returner including the first team in 2018 and 2020. The school’s record holder in punt return yards, Covey is also in the Top. 10 for all-purpose career and career receiving yards in Utah history.

To be eligible for the Pac-12 Scholar-Athlete of the Year award, student-athletes must be senior (in track and field), on track to graduate, have a GPA of 3.0 or above, participate in at least 50 percent of the competitions scheduled in sport and have a minimum of one year in residence at the institution. Each Pac-12 institution can nominate one person per sport, and winners are selected by a committee of Pac-12 staff members at the end of each sport’s regular season. The athletic achievements of the candidates are taken into consideration when voting for the award.