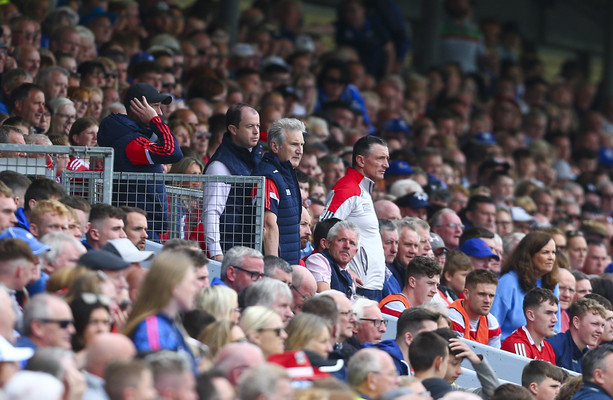 Cork makes up as he goes and a football genius; our favorite sports writing this week

1. The problems that existed before Sunday, within this Cork team and Cork hurling in general, have not dissipated in the summer air and a win at Thurles will no doubt require a double on base which secured two crucial points. at Walsh Park last weekend. Additional adjustments – to personnel, positions or style of play may also be required.

In three games so far, we’ve replaced our full-back, centre-back, midfield pair and perhaps even now our sniper talismanic. You would have to wonder how many more in-flight repairs we can afford to do as we approach higher altitude.

We have the impression that we are inventing everything as we go along.

2. There is no manual for this stuff. The navigation app for navigating through the quagmire of grief has yet to be invented. But, if grief really is the thing with the feathers, sport might just be a comfort blanket, a fleeting diversion. The Broken Heart Escape Room. In a world that’s spinning off its axis, we’re looking for reliable oldies. When so much else seems foreign, there is comfort in the familiar. Like the sure bounce of a ball.

Heartbreaking and powerful piece. Dave Hannigan in The Irish Times on how sport is the heartbroken escape room.

3. Late Monday night at the hotel where Oxford United players gathered for their pre-match meal more than 30 years ago, Chris Allen reminisces about Joey Beauchamp — his friend, former team-mate and footballer who allegedly could be anything he wanted to be.

What Beauchamp wanted to be more than anything, however, was an Oxford United player. That he was way too good for them didn’t make a blind difference to Beauchamp. It was his team, his city and his home, and he loved it there.

For The Athletic, the life and death of Joey Beauchamp, the football genius who didn’t want to be a hero.

4. Well done, Jake Daniels. Applause, please. And thank you for your leadership. Football, sports, male environments and indeed the whole world have all become somewhat saner places with the news that Daniels has decided to publicly discuss the fact that he is not just a professional footballer but a gay man.

The first part of this is, of course, unremarkable. The second part is. For those unfamiliar with the inner workings of football, it might seem really crazy that it should even be news, that a trailblazer is needed, and in fact it should turn out to be a teenager who made his debut at Blackpool two weeks ago. But make no mistake, this is both a remarkable moment for men’s professional football and an exceptional display of courage from a 17-year-old who has yet to succeed. to settle in his sector; but not wanting, as he says, “to pretend”.

For men’s football – and in fact for men’s sport, professional and amateur – it’s the sound of a wall being knocked down.

Get closer to the stories that matter with exclusive analysis, insight and debate in The42 Membership.

5. Sorrow drags him down into the black depths where no sun penetrates. She says she feels like there are weights strapped to her wrists and ankles dragging her down to those unknown depths. It is a realm of constant suffering. She says she haunts her own house at night, walking around in a daze, immersed in this unforgiving silence. She lives with Cassidy, her daughter, born seven years after Kevin, and their dog Max.

His daughter, his sisters and brothers, his friends and neighbours; Kevin’s father, Kevin’s friends, her family of boxers: this great circle of love and support has folded around her. They too were deeply affected, she explains. The bomb that imploded that night generated waves of pain that spread and hurt all they touched. The damage inflicted by an evil act reverberated from its epicenter to the farthest reaches of an entire network of people.

Tommy Conlon in The Sunday Independent speaks to brave Tracey Tully about the life and death of her son, Kevin Sheehy.