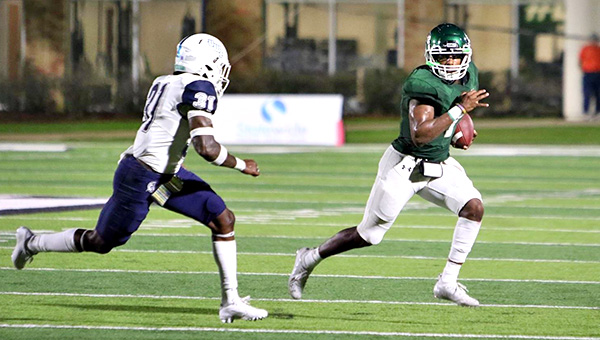 Jelani Eason threw a 2-yard touchdown pass to Caleb Johnson in the final game of the game as Valley knocked out the North Carolina center 17-16 on Saturday.

The Delta Devils (1-3) ended a nine-game losing streak that stretched back to the 2019 season by beating a North Carolina Central (2-3) team ranked No. 10 nationally on HBCU schedules.

North Carolina Central (2-3) looked to have the game in hand after Davius ​​Richard’s 1-yard run with 25 seconds to go capped a nine-play, 82-yard drive. But Adrian Olivo missed the extra point and the Eagles lead was 16-10.

Richard had 14 of 25 passes for North Carolina Central, for 198 yards and a touchdown with an expensive interception. The Eagles were leading 10-3 when Volme Swanier caught a pass from Richard on the last play of the first half, sending her back 41 yards for a touchdown and tying the scoreline to 10.

Delta State was leading 33-17 after Connor Mantelli kicked a 28-yard field goal with 6:24 left in the third quarter. West Florida then scored 22 unanswered points in 11 minutes to definitely take the lead.

Reed’s touchdown pass to Mason and a two-point conversion gave the Argonauts a 39-33 lead. Delta State threw an interception on his next possession, then, after getting his own pick, flipped him over the downs with 34 seconds left.

Delta State has lost three games in a row, for a total of 14 points.

Mississippi College threw just five passes – Smith-Moore was 3 of 5 for 98 yards – and ran the ball 73 times for 398 yards. Cole Fagan finished with 93 yards on 24 carries, and Marcus Williams had 93 yards on 11 carries.

Josh Miller had six tackles and one interception to lead the Choctaws’ defense.

Nic Hayes and Moise Tezzo caught four passes apiece, and both tallied over 100 receiving yards for Millsaps. Tezzo led the team with 114 yards and one touchdown, and Hayes had 107 yards and two touchdowns.

In addition to his big day passing, Thompson had 41 yards and a rushing touchdown. Thompson’s 70-yard touchdown pass to Hayes gave the Majors a 28-7 lead with 57 seconds left in the first half. The pair reconnected early in the fourth quarter for a 21-yard touchdown after Rhodes scored twice to reduce the deficit to 28-21.

Belhaven 42, Texas Lutheran 35
Mayowa Asagunla threw a 24-yard pass to Brooks Brymer on the opening play of the fourth quarter to put Belhaven ahead, and Brad Foley scored on a 13-yard run later in the quarter to mark the Blazers’ victory over Texas. Lutheran (1-4, 1-3 American Southwestern Conference).