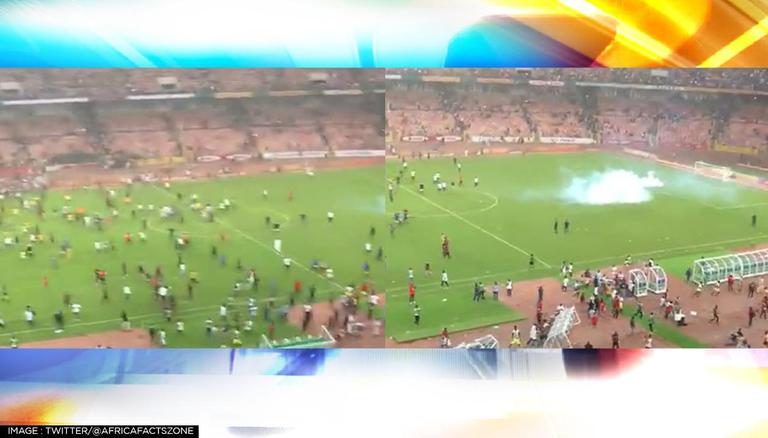 Hundreds of Nigerian football fans flooded the pitch at the Moshood Abiola National Stadium in a dramatic event on Tuesday after their side lost a key FIFA World Cup qualifier. The incident came after Nigeria and Ghana drew 1-1 in a World Cup qualifier which saw the Super Eagles knocked out of the competition on the basis of a away goal scored by Thomas Partey. The first leg encounter between the two teams ended without a goal.

Fans were furious over Nigeria’s elimination from the World Cup, after which they stormed the pitch and destroyed everything at the Abuja stadium. To disperse the furious Nigerian fans, the security authorities present at the scene were forced to fire tear gas. In videos and images uploaded to social media, hundreds of people can be seen leaving the stands and entering the pitch full time, inflicting property damage.

The Nigerian football team has been one of the most consistent in Africa to play in the FIFA World Cup over the years. Nigeria missed out on qualifying for the World Cup for the first time in 16 years. This could be the source of fans’ anger at the Abuja stadium. However, nothing can justify the act of violence perpetrated by the Nigerian fans, who not only invaded the pitch, causing damage, but also injured many people in the process.

In game terms, Ghana took an early lead with a goal from Arsenal midfielder Thomas Partey, which was assisted by Red Bull Salzburg left-back Gideon Mensah in the 10th minute. Nigeria equalized 12 minutes later, thanks to an incredible goal from national captain and Watford midfielder William Troost-Ekong. The score even passes at half-time.

There were numerous substitutions and yellow cards given to players from both teams in the second half, but no one was able to break the tie. As a result, Nigeria were knocked out of the World Cup because they conceded the goal at home in a game that ended in a draw. As for the World Cup, FIFA’s flagship event will take place in Qatar in November this year.