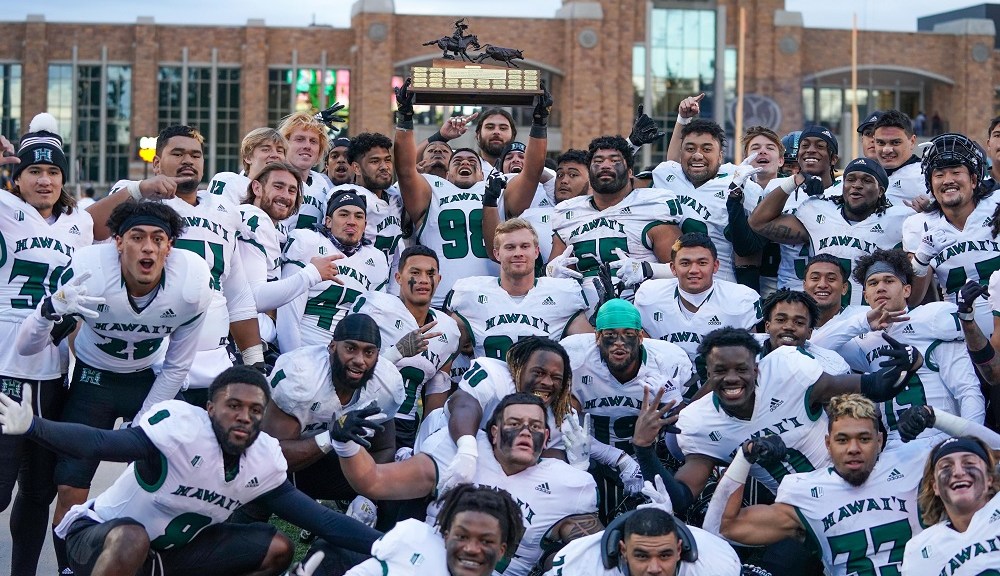 What we learned in Hawaii Spring Football

Hawaii Warrior fans, we’ve found the right guy. Since being hired on Jan. 23, head coach Timmy Chang has worked tirelessly to rebuild the program’s culture. He has assembled an energetic team of hungry young coaches who have ties to Hawaii or the Polynesian community and share his vision of the #BRADDDAHOOD culture he is trying to instill. At first glance, the players bought in. I got to attend a few spring practices and the feeling I got leaving campus was that this guy is a natural. He has that “quarterback in caucus” swagger and seems completely comfortable running his alma mater.

Coach Chang brought new energy not only to the football team, but to the entire athletics department. He encouraged his players to come out and support other track and field teams, gave halftime rallying speeches in a men’s and women’s basketball game leading to wins behind, threw the first pitching at a baseball game (Basebows is on an 8-game winning streak), and Saturday night about 6,000 fans showed up for the Island Day Spring Game. It was a big event with activities for children, a concert by the local reggae band “Rebel Souljahz”, food vendors, and it was capped off with a spring game that got Warrior fans excited about the Timmy Chang era.

It was one of the best turnouts I’ve personally seen at a UH spring game. The fans were happy and enjoying the evening but more importantly the players were happy. They looked like they were having a great time and enjoying the support of the community. Football is supposed to be fun and if any of the players lost that joy for the game last year, they seem to be back now. This can be attributed to Coach Chang and his staff. You can tell from the pre-match warm-ups that this staff is different from last season. They bring energy and enthusiasm and the players feed off of it. Timmy is building something special and this is just the beginning.

Observations of the game: (Some of Saturday night’s jersey numbers didn’t match the list, so I may be wrong on a few of them)

-First team Offense seems to be playing together on the black team. Brayden Schäger gets the first reps at QB with this unit. WR Zion BowensWR Jonah Panoke (I believe he wore 11 for the spring game), Slot James Phillips, TE Caleb Phillips, RB Dedrick Parsons

-It seems that the defensive starters are a little more mixed between the white and black teams. I could also be completely wrong and the black team could be the team’s first defense. This would mean that some players overpowered others in the spring and upset the depth chart. For example, I’m guessing Isaiah Tufaga and Penei Pavihi would be the starting linebackers and they were on the black team, but a few key contributors from last season who I thought would slip into starting roles in corner Hugh Nelson and safety Solo Turner were on the white team.

We can’t wait to see you all again and PACKED in this student section!! 🤩 See you Saturday @HawaiiFootball 😎 #manoamanes pic.twitter.com/cYjpX7DYj0

– Cornerback Virdell Edwards looks big and moves fluidly for someone his size.

-Dedrick Parsons seems to have taken his game to another level and is ready to take the lead again.

-Brayden Schager dropped a penny to Zion Bowens for about 40 yards. Great throw and great work from Bowens to get under and catch. Bowens looks good. Speed ​​kills.

– Schager 2/2 TD on his first 2 drives. Walk the ball up and down the field. Seems confident. Throw the ball on time and with precision. Looks like QB1’s spring ball coming out.

-QB Jake Farrell looks solid tonight. He quickly gets the ball out of his hands and gives his guys the chance to make plays. It looks like he’ll be challenging for that No. 2 QB spot because cammon cooper is struggling to complete passes tonight. Not a great performance for the Wazzu transfer.

– Running back Nasjzae Bryant took a swing pass, broke a tackle and gained about 40 yards. It looks like he will contribute this season and help keep Parsons fresh.

-The star of the game was a local product (Campbell HS) Tamatoa Mokiao-Atimalala. Mokiao-Atimalala scored 3 touchdowns on the night, including a 70-yard push from Farrell that he took home. He should bring the depth chart up after a performance like that.

-If the black team is the first team defense, it’s a little worrying that Farrell and the 2nd unit offense roamed the field in that first half.

-Freshman Peter Manuma loves contact. Big collision with Dedrick Parsons on the first disc and another with Stephen Fiso later in the first half. Impressive to see a freshman guy playing with that kind of physique.

-Kicker Matthew Shipley just nailed a 55-yard FG. It looked like it could have been good from 60. Earlier on the opening kickoff, Kyler Halvorsen bombarded him beyond the end zone and he hit the stands in the student section at the fly. Off topic but if you haven’t already, you should check out Shipley on the mic on Youtube. It’s hilarious. Exactly what you think kickers would do in practice.

-Leonard Lee played safety for the black team and finished the night with 2 INT. Going from being kicked off the team by Coach Graham in December to being the defensive player for the spring game, Lee seems to be really enjoying this second chance.

-Great to see so many local players stepping in and making plays on Saturday night. It seemed like there were a lot of local rookies in attendance, so hopefully they took that to heart and consider the Warriors when making college decisions.

-There are some gaps to fill (we still have a few scholarships available for this class and not all 2022 signers are on campus yet) and things to work on as everyone learns new patterns, but this was a great outing for the program.

Saturday’s event brought the community together to support the local team. It’s something that’s been missing for so long and feels so good to be back. I took my 4 month old son, Owen, to his first UH football game. I intend to pass on my love and fandom for this team to him, just as my grandfather did for my father, and just as my father did for me. I know I’m not alone in this tradition and I know many like me are excited for what’s to come in the Timmy Chang era. 131 days to Vanderbilt. The program is going in the right direction and as always, let’s go Bows!